We were slowed a bit this week by colds and sniffles, but we've still done some fun things.

Last time I reported in, we'd just seen the Crown Jewels and a guard ceremony at the Tower of London. This week we started by accompanying my students to the Victoria and Albert Museum to see their exhibit "You Say You Want a Revolution." It is quite amazing. You wear headphones through the exhibit, and the audio alternates between music and soundtracks from the various video screens. On display are lot of musical artifacts from the late 60s, such as handwritten lyrics to Beatles songs on pages penned by John, Paul and George themselves, instruments played by the greats, and even a purple coat worn by Jimi Hendrix on stage. While the exhibit is framed by music, it is really about the culture, protests, politics and style of the era. Fits perfectly with my class!

Museum-goers were not supposed to take pictures, but I couldn't help myself when I saw actual working-condition Apple I computer, the predecessor to the Apple II. I've seen photos, but don't think I've ever seen one in person (although I suppose it's possible that I did lay eyes on one when I was a kid, accompanying my dad to Apple shows and users' group meetings back in the 70s). 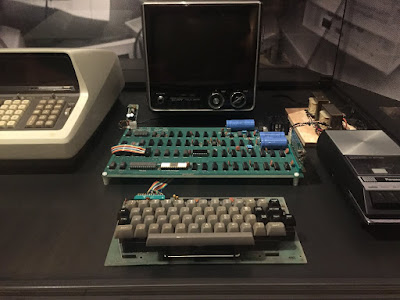 The section of the exhibit on activism, printed posters and their effectiveness, inspired me to create my own politically-minded poster. 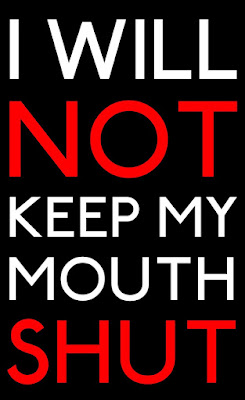 On Thursday we decided to catch our first non-musical play, Agatha Christie's The Mousetrap, in part because Catherine is a lifelong fan of the mystery writer. After we bought tickets at TKTS, Max spotted the Lego store in Leicester Square, so of course we had to poke our heads in for a quick visit. Just like the NYC store in Rockefeller Center, this one has massive Lego sculptures, but here they're mostly London-themed. 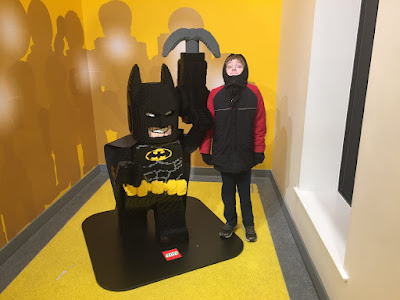 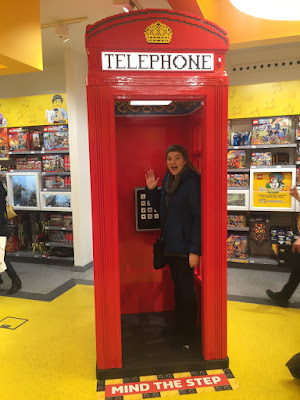 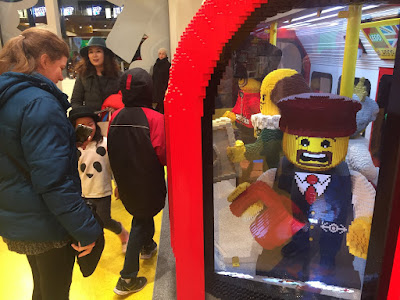 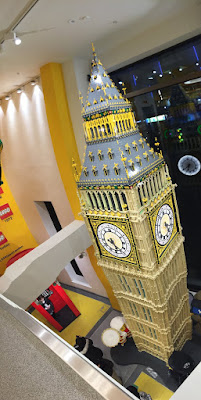 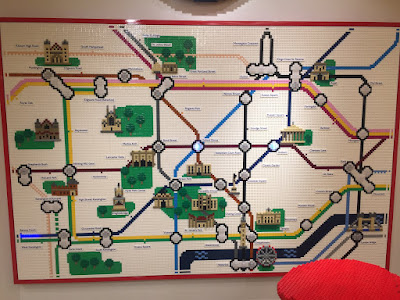 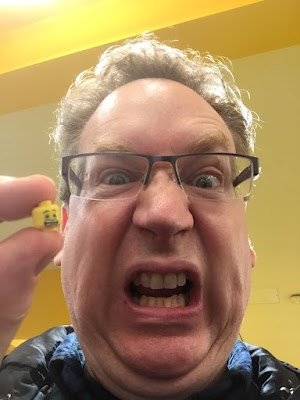 Even with stops at Lego and for dinner, we did ultimately make it to The Mousetrap on time. Max loved it. By the intermission, he was convinced he'd narrowed the whodunnit list down to two possible suspects. I would tell you more, but I shouldn't give it away! Even though St. Martin's Theatre is relatively small, I was quite impressed that the actors used no microphones, and even in the balcony we could hear every word. 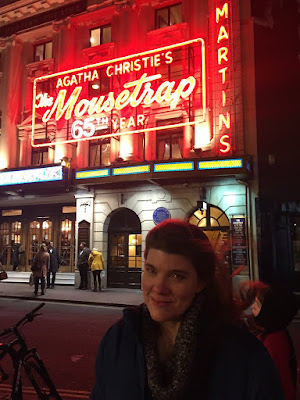 On Saturday we walked over to an interesting historic spot near our house, Merton Abbey Mills, the site of an old fabric mill and a still-working water wheel generator, and some little shops housed in the buildings on the premises.

After I taught my class this week, walking towards the museums to meet the fam, Catherine texted me with two words -- "Fire tuba." I thought this was a some kind of strange auto-correct, but no, there was a tubist with balls of fire coming from his bell. 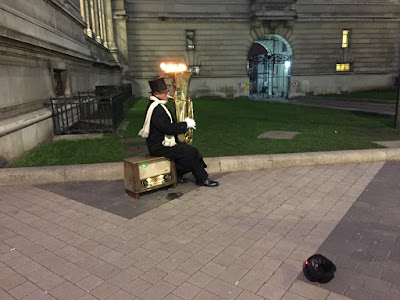 Thursday I accompanied my class to hear the Southbank Symphonia play Salieri, Mozart and Schubert in a free rush-hour concert. I wonder if American classical music would get more attention if US orchestras gave free glasses of wine at the beginning of their concerts! They're quite a fine orchestra, and I talked to a few of the players, including the bassists for whom I now convey greetings to my colleague ISB president-elect Nicholas Walker. 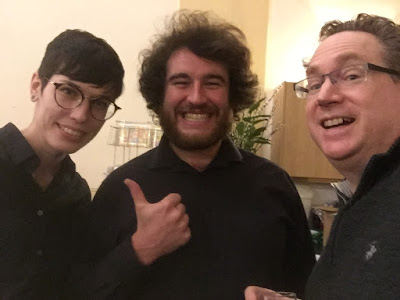 Friday we travelled to Cambridge with the ICLC, and toured the huge Kings College chapel. 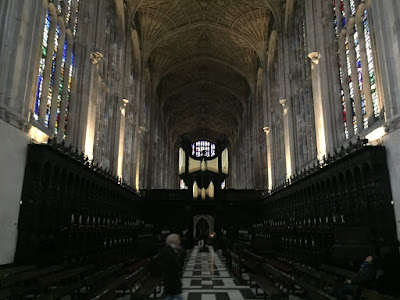 Whaddya think -- is this graffiti I found in the chapel really from a disgruntled student in 1661? 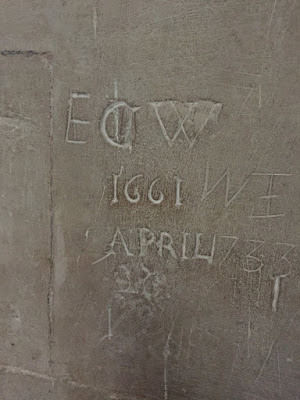 We climbed the tower of the Church of Great St. Mary, and heard the bells chime each 15 minutes. The famous tune associated with Big Ben's chimes at parliament actually originated here! The view of Kings College from the tower was quite lovely as well. 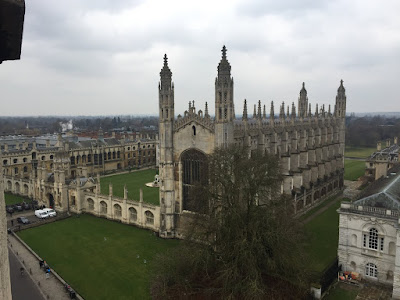 We heard about the famous Chelsea Buns at Fitzbillies, so we had to pick up a few (but no, we didn't buy the whole tray). 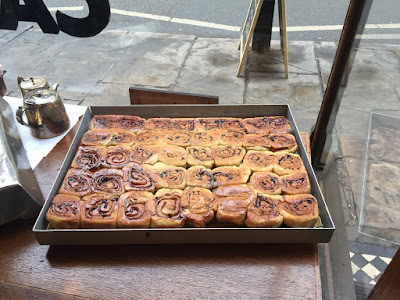 Our final stop in Cambridge was The Eagle pub where DNA researchers Francis Crick and James Watson first announced they had discovered the "secret of life." We had some snackies and ale at their famous RAF bar, where WWII pilots drank and put their marks in graffiti on the ceiling. 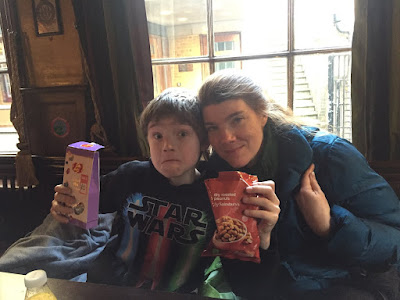 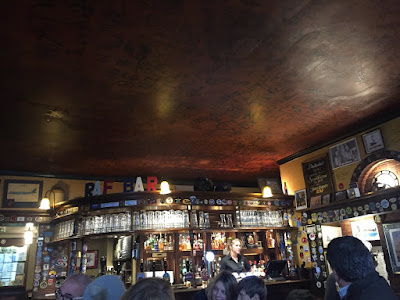 Lastly, we caught another play, the Royal Shakespeare Company's Love's Labour's Lost. We enjoyed the production and the staging, but it was a bit challenging to follow for those of us not so familiar with Shakespeare's use of language. We have tickets for next week to see Much Ado about Nothing, so we watched the very enjoyable Kenneth Brannagh/Emma Thompson film version on DVD to prep ourselves in advance of that (and spent some time pausing to discuss some of the particularly funny bits). So next time, I'll report on how we enjoyed the play!