When I last left off, we were about to take the train to Florence. Before this trip, I had previous associations about Venice (y'know, canals and all that), but I knew almost nothing about Florence. This would be an interesting exploration!

Buying the Eurail pass allowed us to simply hop on the train in Venice and head to Florence. It wasn't high speed or first class, but worked just fine. We had an hour stopover in Bologna around lunchtime, so of course it made sense to have bologna in Bologna.


From the Florence Central station we walked to our Airbnb. It was a bit longer of a walk than we might have liked with our bags in tow (and Google Maps seemed a little confused about the actual location) but we eventually found our way there and met our host Francesca. The location was beautiful, right in the square at La SS. Annunziata di Firenze, as 1200s-era church. It was a little unbelievable that it was now an Airbnb, but it had been redone quite nicely, maintaining some presumably original stone features, but modernized and comfortable.

Our first night, we ventured out for a walk and some dinner. It was rainy, but we were able to enjoy some open-air sculpture gardens and piazzas. Francesca had given us restaurant recommendations for dinner, so we headed in that direction. We walked across the iconic Ponte Vecchio bridge, where Max enjoyed the thousands of padlocks affixed there. He said "I'll bet there are a million keys in the water." 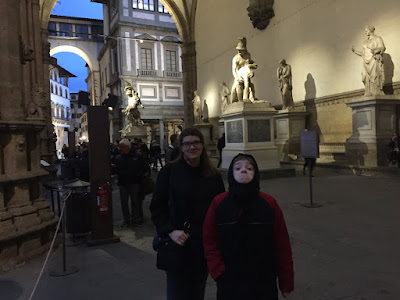 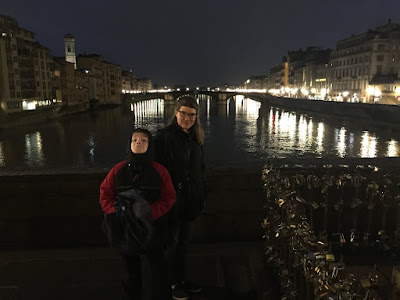 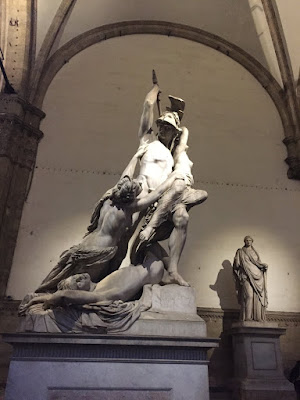 It turned out the recommended pizza place was closed, and our legs were getting pretty tired by this time, so we were thankful to find a simple yet appealing looking restaurant for dinner.  Max was quite happy when their answer to "Do you have bread and cheese" was "Of course!" Well, so was I. 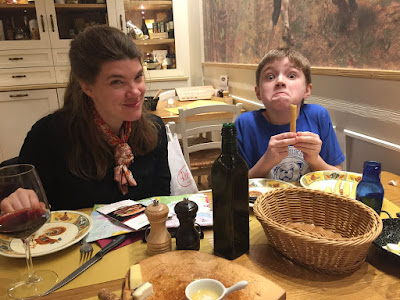 The rainstorm got really intense after dinner. Our requisite search for gelato was complicated even further by a loud thunderclap that took out power for a few minutes. But like a beacon, a gelato place called Venchi had safety lights. When the power came back on, we saw it had a beautiful flowing chocolate sign behind the counter.

I wish I had started shooting the movie right as the power came back on, because it quite dramatic: while the power was off and no chocolate was flowing, the backdrop was white (plastic, maybe?) then we watched the chocolate "bleed down" slowly turning it from white to black. Very cool.

The next morning started with coffee and pastries at a rooftop cafe across the piazza from our Airbnb, with a beautiful view. Yes, for those readers who don't yet know, Max does really love coffee. 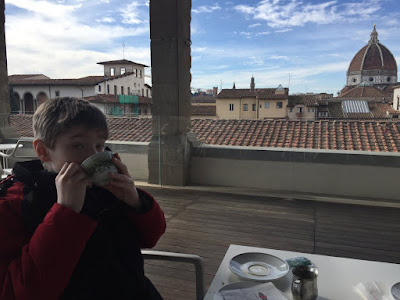 We started our touring at the Florence Cathedral. The duomo, dome, has a ridiculously beautiful painted ceiling. Climbing the duomo is a requirement, but it was closed for visitors while they checked it for damage from the previous evening's storm. But we'd climb it soon enough... 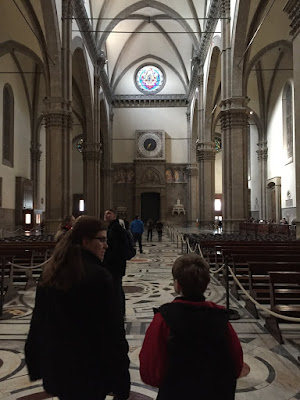 While we didn't climb the duomo this day, we did climb the 411 steps of the bell tower. It is almost as tall, and has just as fantastic a view from the top. 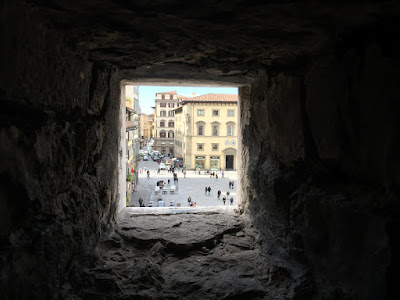 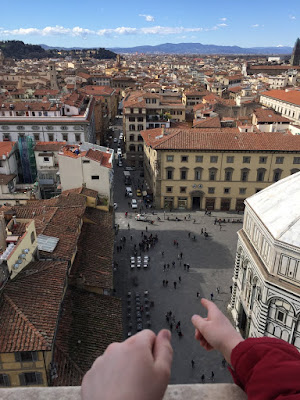 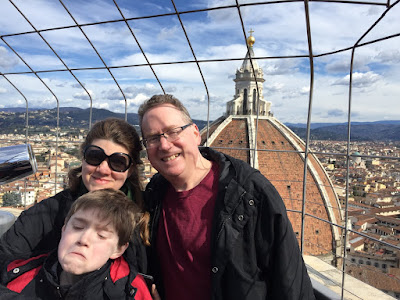 After we descended the bell tower (almost, but not quite, as taxing as climbing it, leading to some griping from the 10-year old contingent) we walked over to the pizza place Francesca recommended the previous day. This time, we did get pizza. Max wasn't quite used to the brick oven style pizza, but Catherine and I really loved it.

We decided that Max had earned some iPad downtime, so I walked him back to the Airbnb while Catherine started checking out the Pitti Palace art museum, and I joined her afterwards. The Pitti Palace is huge, with quite an impressive collection. The rooms themselves are fascinating, many with art completely covering the walls and ceiling, so it's almost impossible to take it all in. 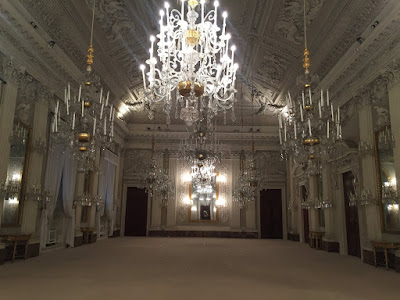 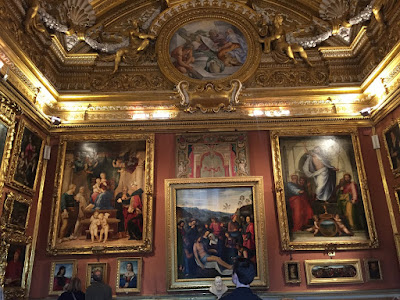 I also enjoyed this instrument, called an orchestrion. I'd never heard of it before! 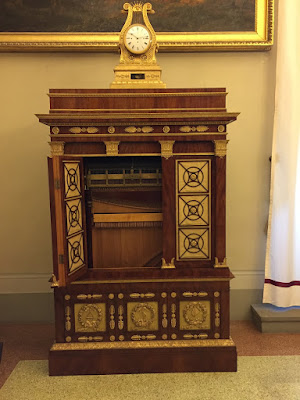 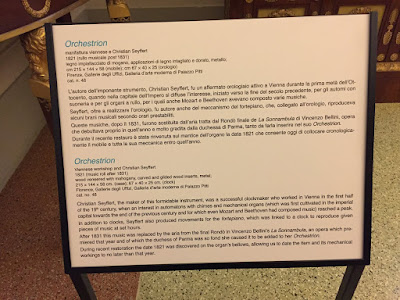 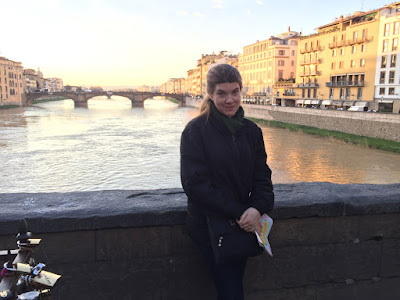 The next day, we did climb the big duomo. Max was clearly starting to get tired of the large-structure climbing thing, but this one was really amazing. On the way up, we got to see the painted ceiling up close, and some of the stairwells were crazily shaped because we were going up the dome at strange angles. Once again, the view from the top was spectacular. 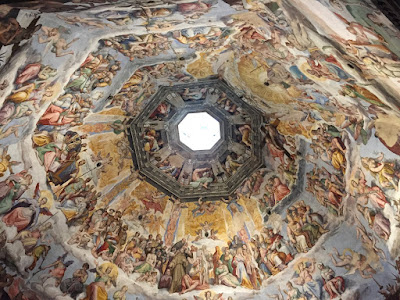 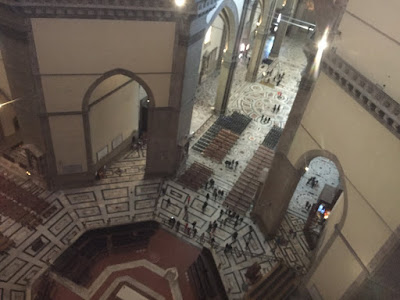 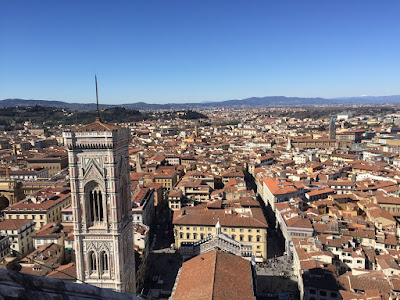 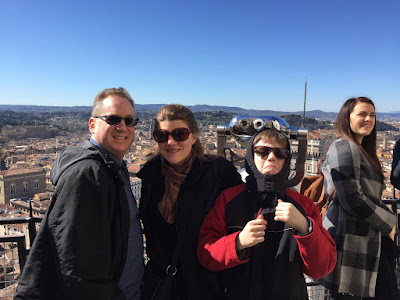 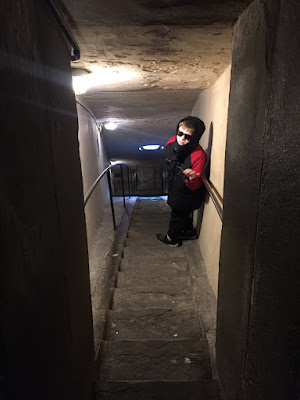 After the 2nd big climb in two days, we decided to head back to the house for simple salad, bread and cheese lunch. The piazza in front was buzzing with activity, because it was the site of a large International Women's Day event. 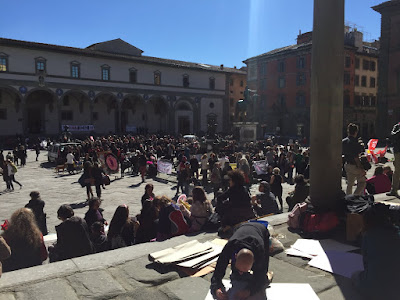 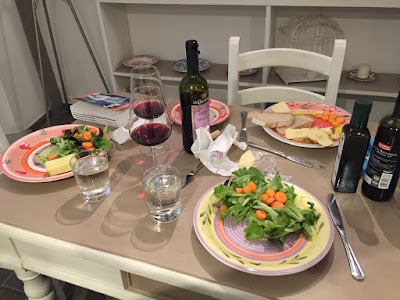 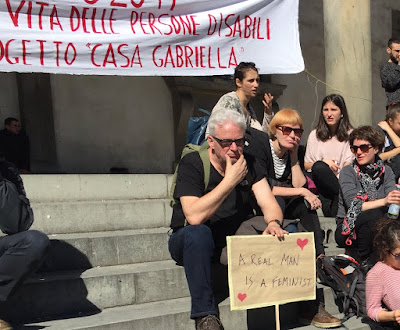 We tried to go see Michelango's David that afternoon, but the museum closed early because of a local transit strike. So, we let Max stay at the house to relax while we went exploring further, ending up at the famous Uffizi Gallery which has several Da Vinci painting, in a section simply called "Leonardo." 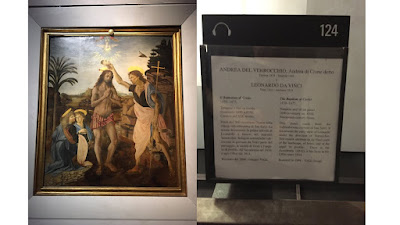 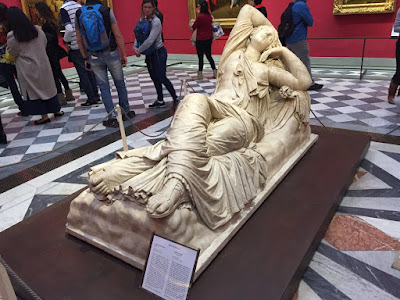 That night we went out for dinner, to a nearby restaurant with a really nice waiter who even brought Max some extra dessert -- a thin, flat Italian cookie. 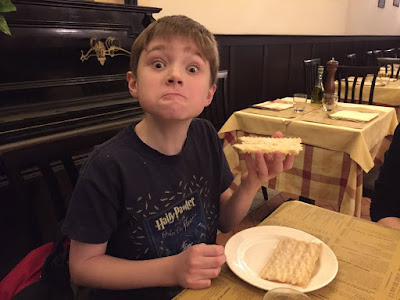 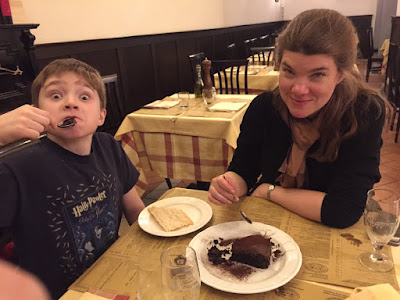 We did eventually get to the Galleria dell'Accademia to see Michelangelo's David, the next morning, just before we left Florence. 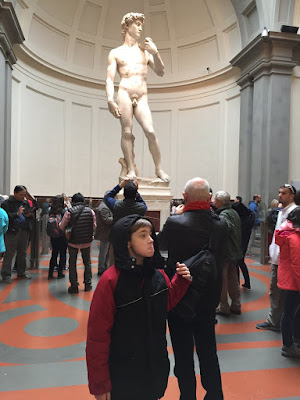 After that, we hurried over to the station to catch a train to our next destination... Roma!

More about that part of our adventure soon-