It's been a few weeks since I last checked in with the blog, but that's mostly because we spent the ICLC spring break in Italy. This was totally new for me; not only had I never been to Italy before, I'd never even been to the European continent. This would be a week of many firsts.

Preceding our trip, we bought a Eurail pass with the intention of improvising most of the specifics. With only a few exceptions, the spontaneous method worked well, but more on that in future posts. The only other planning we did before the trip was to buy airplane tickets for Venice and a few nights of hotel there. When we spied this Norwegian Air plane from the walkway in Gatwick, we thought it was a good sign for our trip. Fans of comedic music will surely know his face. 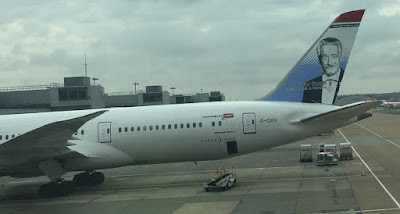 We flew into Venice and navigated to the city by bus and vaporetto (the network of boats all around Venice). We bought 3-day passes so we could hop on the vaporetto whenever we wanted. We were surprised by how narrow the stone streets were -- the hotels directions said to take the 2nd left after getting off the boat, but we hadn't even started counting yet because the streets looked like alleyways. But ultimately, we found that our hotel was perfectly located right near the beautiful and historic Rialto bridge. 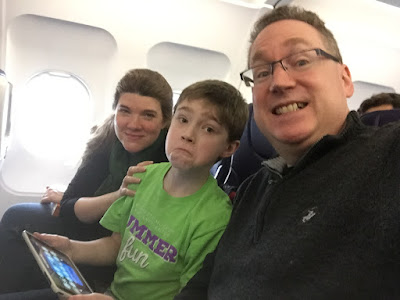 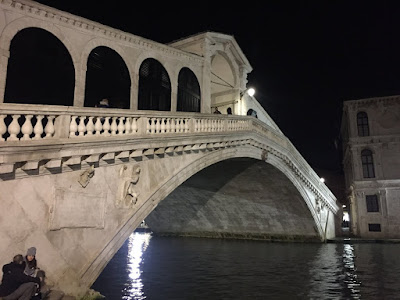 Even though we arrived somewhat late in the evening, we had time to go out for a nice pasta dinner and a stroll over the bridge. Max has never been a tomato sauce-crazed kid, but even he loved their spaghetti pomodoro. And Catherine and I both enjoyed the pesto. 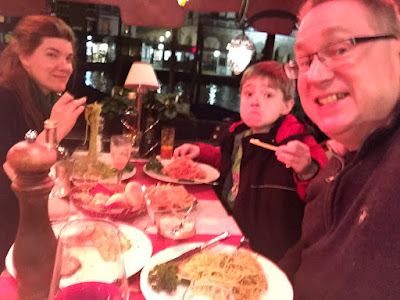 We all very much enjoyed the hotel breakfast as we started our first full Venetian day -- Croissants and Nutella! The coffee was quite good, too. This was a very different level of morningtime experience from a typical American hotel. 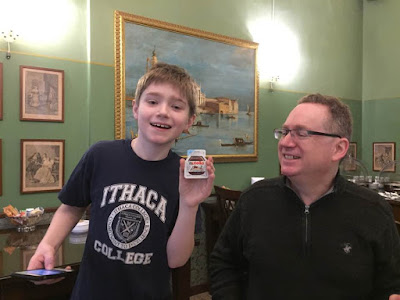 After going a little too crazy with Nutella and red "blood" orange juice, we walked over to the Piazza San Marco and headed into Basilica di San Marco. None of us have spent much time in historic churches, so the sheer size of it was overwhelming right away. But soon, the amount of gold mosaics and ornate tile work took over their proper "mind blowing" duties. 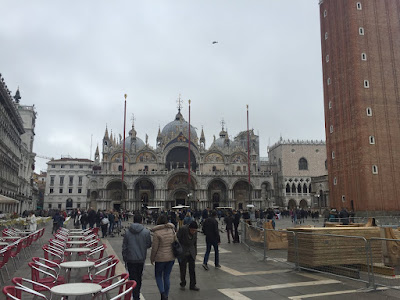 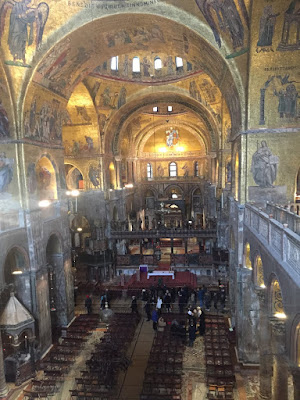 After checking out the inside of the church, we went upstairs and outside onto the observation deck where we enjoyed the grand view of the piazza. 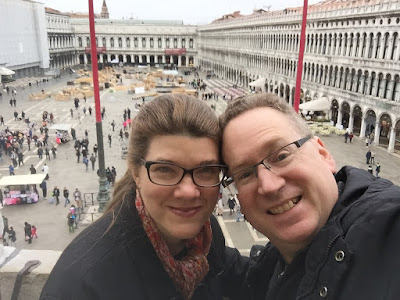 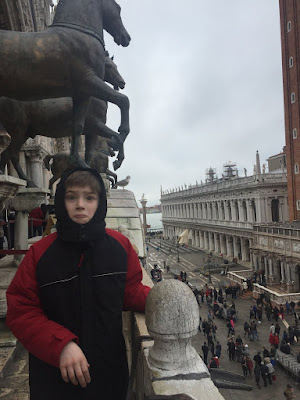 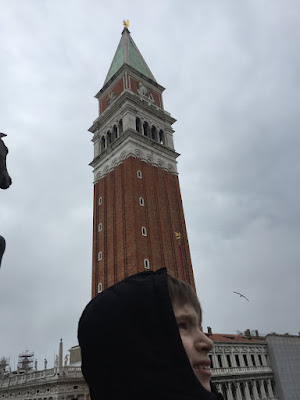 The observation deck also gives a great view of the very fun automated bells at the adjacent Torre dell'Orologio.

San Marco also has a wonderful museum. If I had paid better attention during my music history classes, I could probably describe for you how this music would be performed. But since not, I mostly just enjoyed how much time and care went into preparing this music book we saw there in this book at the museum. 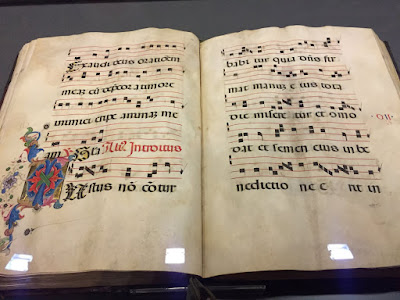 After the church visit, we all needed lunch and a pick-me-up, so of course, we stopped for gelato. 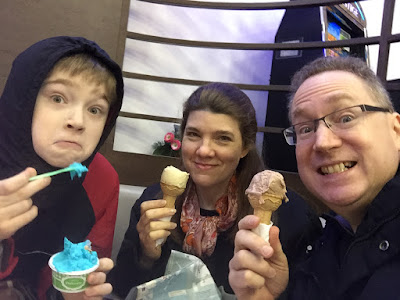 This day, our first in Italy, was not particularly beautiful weather-wise. We took the vaporetto to Lido island and walked over to the beach on the far side. I suppose this was not inherently a bad idea, except we realized that if we wanted a beach vacation, Venice in early March was not quite the right timing. But we could see how this beach would be quite lovely (and crowded) in the summertime when it wasn't so rainy, windy and cold. 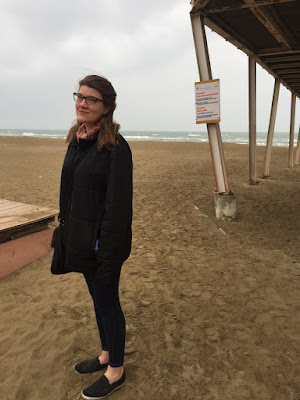 For our mid-afternoon snack, Max and I got Nutella crepes, hot off the griddle. Did she really even need to ask if we wanted powdered sugar on them? 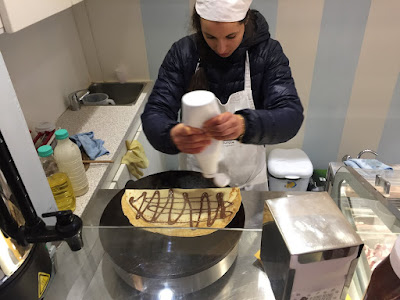 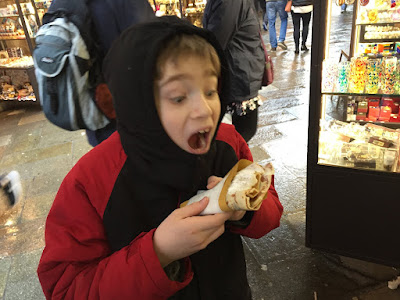 Max's quote of the day comes from dinner, when he asked "Why are there three chopsticks?" Once he realized they were breadsticks, he was happy there were actually more than three in the bag. 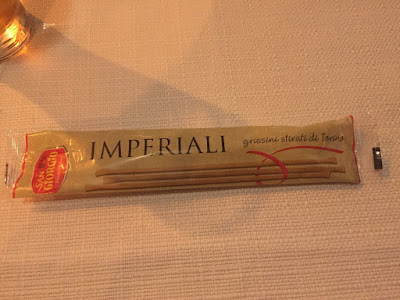 The next day started with plenty more Nutella. We started our exploration by taking the vaporetto over to the Gallerie dell'Accademia museum, where we all recognized the front of the church in this painting. Hey, we were just there!

We walked over to the Punta della Dogana, where we got great views of the piazza del San Marco, the spot we had just explored the previous day. 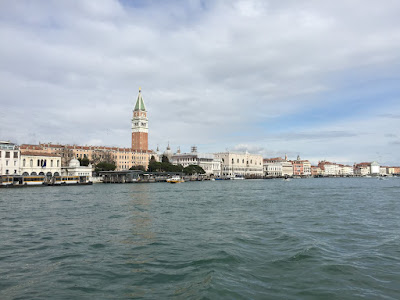 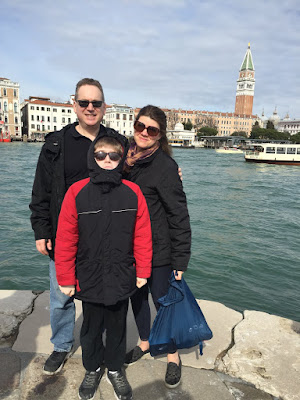 We went back to the piazza and explored the amazing Doge's Palace. The palace has amazing artwork and incredibly ornate ceilings. As our legs got tired, we found it was quite challenging to take it all in. But we took lots of pictures to try to later remember the feeling of being there. 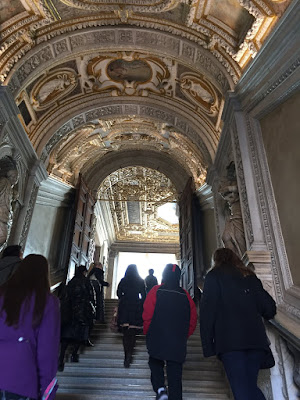 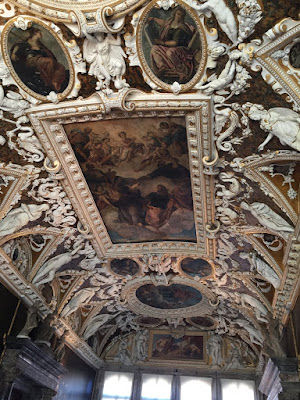 Got the prisoner's view from the Bridge of Sighs. Sigh. 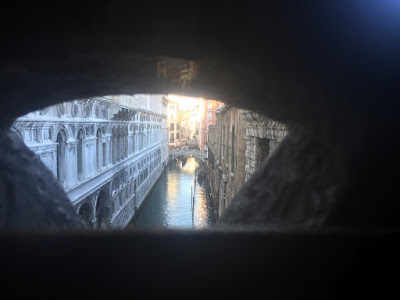 Because it was sunnier, we got some nicer photos from the vaporetto. It was fun to realize that, as obvious as it may seem in retrospect, Venice uses boats to deliver shipments around town instead of trucks. Well, of course they do! 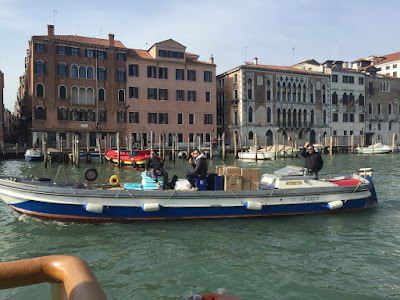 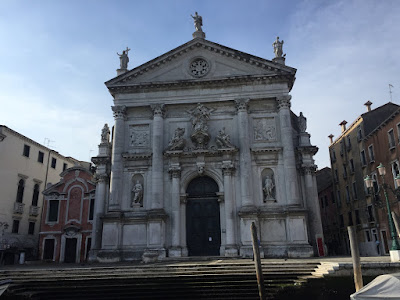 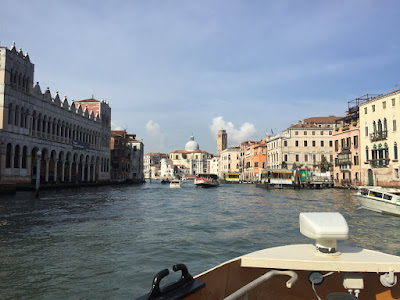 As beautiful as Venice was, we wanted to explore more of Italy. So we booked an Airbnb in Florence, headed over to the train station and hopped aboard. 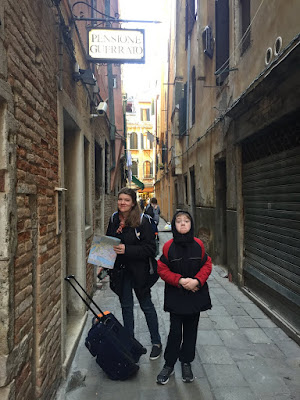 My next installment will tell of the next days in Florence.