Who Would Profit From the Wall?

On January 26th, The NYTimes reported that Steve Bannon, chief strategist to president Trump, said the media should "keep its mouth shut."  This chilling and unconstitutional warning issued by the executive branch of our government should remind us of the real importance of our first amendment right to freedom of the press. We need the news media to be aggressive and vigilant, now more than ever.

I would like to articulate just one of the many reasons why this is so. Donald Trump has refused to divest himself from his businesses, release his taxes, or to make any meaningful efforts towards even acknowledging -- let alone resolving -- any conflicts of interest, in spite of the fact that he promised to do so during the campaign, now citing the disinterest of the American people, adding that the election itself had "litigated" this question. And now he has just signed an executive order promising to build a border wall with Mexico that would conservatively cost the American taxpayers $25,000,000,000. That is twenty five billion dollars. Billion. With a B. 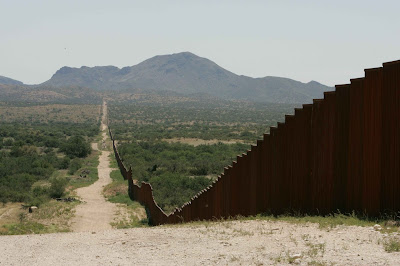 Looking past the point that the wall would be ineffective and counter-productive, pundits are arguing over who would pay for construction of the wall -- the U.S. or the Mexicans. That's a critical question, because I don't want to pay for it. But the government pays for all sorts of things I don't like, and I still pay my taxes.

So, my next concern is this: Who would profit from the building and maintenance of this wall?

The federal government does not perform all of its duties with full-time government employees. It contracts with hundreds or thousands of private businesses and contractors. A project of this magnitude would require hiring and contracting with thousands of construction workers, managers, architects, and transportation companies, and certainly many would come from private enterprise.

Trump has a stake in or owns over five hundred for-profit businesses. The Democratic Coalition Against Trump published an app with a list of organizations that do business with Trump. But international businesses are massive, complex organisms. There are shell companies, holding companies and money stashed abroad that we don't know anything about. And because he is a pathological liar and lifelong con artist, we can't believe anything he says without verifiable proof.

The constitution already contains the emoluments clause, intended to keep our president from being influenced by foreign governments. The litigation surrounding his conflicts on that front has already begun. But how can the American people have confidence that the money being spent on this wall won't end up running through Trump's own companies?  Is it possible that the entire project has nothing to do with protecting American interests but was drummed up entirely in order to line his pockets and those of his children?

Even if Trump's impetus for building the wall is not entirely selfish, it would be entirely reasonable to believe that some portion of the $25,000,000,000 spent on this wall project would ultimately flow through one of the businesses in his international conglomerate. Without full and complete disclosure, I have no way of knowing the whole story of whether any of our taxes would be going to Trump. If even one single dollar did end up in his pocket -- whether that money originated from Mexico or the American taxpayers -- that profiteering would be a criminal impropriety.

Because he has not allowed the American people to know any of the details of his business interests and where his profits come from, we have no way of knowing of any actual improprieties arising from these conflicts.

I am not a journalist. I do not have the experience or expertise needed to investigate these issues, but I think the stability and well-being of our democracy demands that the conflicts need to be admitted, addressed and resolved. Newspapers like the New York Times and other reputable news organizations with a strong staff of experienced investigative journalists could and should work to expose this corruption. I am happy to pay my subscription fees for this.

The first amendment to our hard-fought constitution does not say that the press should have freedom except for the pesky stuff the president doesn't like. In fact, they have an ethical obligation to report the corrupt practices that elected officials want to keep secret. The news media definitely should not keep their mouths shut.

Mr. Bannon should shut his.


The corrupt, pathological liar Donald Trump was elected president because of early and unwavering support by people such as the unethical opportunist Tom Reed (R-NY 23rd district). I believe we voters should do everything in our power to ensure Tom Reed is unseated in the 2018 election.
Posted by Unknown at 3:14 AM